Risks in the market are higher than usual right now

By Kevin Kleinman January 5, 2020 No Comments

The S&P 500 rose more than 25% in 2019 and started 2020 with a 1% gain on the first day of trading. However, that first-day rally was followed by a sell-off on the second day of the year. The headline getting the attention is the killing of a key Iranian military leader. But if you think stocks are selling off because someone whose name you can’t pronounce was killed, think again. The truth is the market has delivered extraordinary gains in the last 12 months. Expecting them to continue unimpeded is naive. In the near-term, we think the next 2-5% move in stocks is likelier to be to the downside.

The stock you can thank most for the market’s recent success is Apple. Given how the major US indices are constructed, a single stock like Apple has a bigger impact on the market than others. So Apple’s 85% rally in 2019 had a huge impact on returns for each major index. In the graph below, Apple’s contribution is the return Apple contributed to the index. And Apple’s impact is measured by taking that return and dividing it by the total return of the index. For example, Apple contributed almost 4% to the S&P 500’s total return last year. That means Apple accounted for more than 12% of the index’s total gains in 2019.

Apple and the S&P 500 have spent much of the last year moving in the same direction at the same time. We expect this correlation to remain relatively intact over the near-term. So in trying to guess what the market will do next, all one may really need to do is look at Apple. So let’s have a look:

Over the last 10 years, every time Apple went up 100% (blue arrows) it then had a hard time continuing higher in the near term (red lines). The only time there wasn’t at least a 15% drop in the share price after a 100% rally was in 2010-2011. And that was a period that followed a 60% decline in 2008. In other words, Apple was still bouncing back from the steep losses caused by the Global Financial Crisis. In 2018, Apple initially went higher after doubling. However, the stock gave back those gains in the middle of the year and proceeded to fall by more than 35%.

Given that Apple’s stock price just doubled again in the last 12 months, we wouldn’t be surprised to see it struggle in the near-term. And if Apple declines by more than 10% anytime soon, that’s likely to have a negative impact on the broader market. Aside from Apple, other clues suggest the market might be ready to take a bit of a breather. Market sentiment has shifted dramatically. Investors have gone from very scared and underinvested, to very confident and possibly overinvested.

In addition, proprietary indicators from SentimenTrader show investor optimism is at a 15-year high (as of 12/26/19): 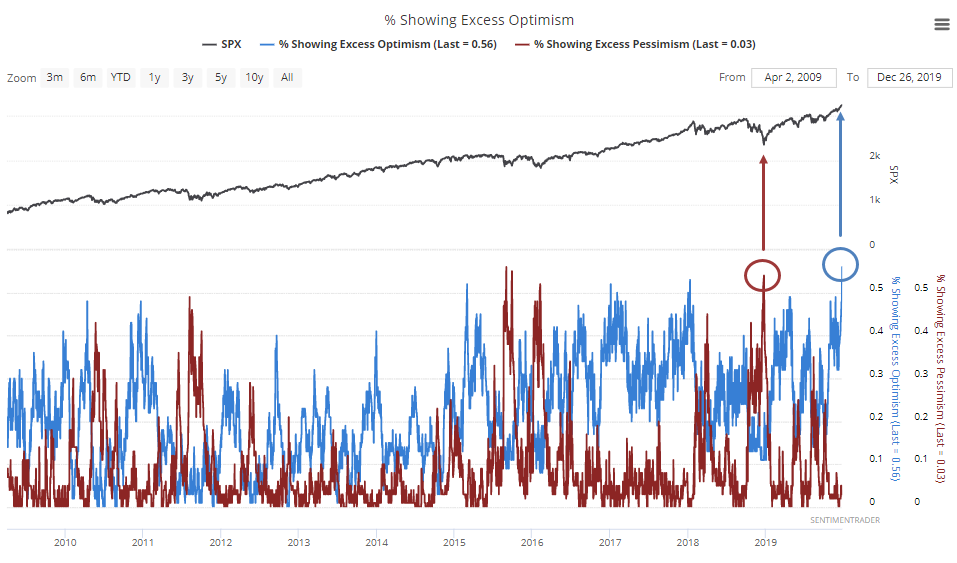 We’d rather not “buy high”

Market sentiment is very hot at the moment. This is classic investor behavior and suggests investors have confidence in buying high right now. Will it work out? Who knows. But we’d prefer to turn a little more cautious now that everyone is bullish on stocks. If you recall, one of the main reasons we were bullish back in September is because investors were bearish on stocks and bullish on bonds. It turns out they were selling stocks near the low, and buying bonds near the high. Now we have the exact opposite going on. Investors are bullish on stocks and bearish on bonds.

In the long-term, we’re still comfortable with our equity exposure. But in the short-term, we are taking more of a wait-and-see approach with stocks. Especially for any new client money that just came in to start the year. We’re not allocating as much to stocks right away as we usually would. Instead, we’ve been finding value in bonds. Particularly in the middle part of the curve via ETFs like IEI and SCHR. When it comes to meeting some of our equity allocation goals, we’ve been using some buffered ETFs like BJAN.

We think near-term risks in the stock market are skewed to the downside. Apple, the most important stock in the market just rallied 100%. Similar rallies over the last 10 years have been followed by some weakness in the stock. We think any weakness in Apple would likely translate to weakness in the broader market. Even if the S&P 500 drops just 2-3% from here, that would likely be enough to refresh some of the extreme optimism we’re currently seeing. And we’ll become more confident in our near-term equity allocations as soon as everyone else becomes less confident in theirs.

Are ETFs better than mutual funds?

Small caps are leading in November