Small cap ETFs – Ready to brag instead of drag

By Kevin Kleinman September 11, 2019 No Comments

Year-to-date, owning small-cap ETFs have been a drag on our portfolio performance. We take the approach of trying to own the whole market: large-cap, mid-cap, and small-cap. That view has been tested greatly, not just this year, but over the last 5 years. That’s because small caps have dragged down portfolio performance relative to large caps. For example, large caps as represented by the SPY ETF (S&P500) is up 20% YTD. Small caps as represented by the SLY ETF (S&P Small Cap 600) is only up 12%. You can see the comparison as shown in these two ETFs below:

Small Cap ETFs have been a drag

As the data above illustrates, small caps have been underperforming large caps consistently for the last five years. The underperformance is even greater over the last one year period. Aside from looking at annualized returns, another way we measure small-cap performance vs large-cap performance is by charting the two market segments against each other as a ratio. Then we judge the trend of the ratio to determine which is performing better. The chart below shows SLY vs SPY’s monthly performance over the last 13 years:

Notice that small caps performed better than large caps following the 2008 financial crisis. Then from 2010-2018, the two segments took turns doing better than the other. In that instance, we would say they moved together. Or that the performance spread between the two remained in a clear band (yellow box). However, in mid-2018, small-caps topped out vs large-caps and began significant underperformance. The spread between small-cap and large-cap performance is the widest of any instance over the last 13 years.

Positive signs in the last 30 days

But recently there are signs that small caps could be ready for another turn in the spotlight. Look at our ratio chart from the last 30 days:

The blue lines are annotations to try and highlight the slope of each move up in small caps relative to large caps. There have been plenty of false starts in the past. Or times, where it looked like small caps, were ready to start outperforming large caps, only to remain in their trend of underperformance. However, this latest move higher is bigger in magnitude and steeper in slope. This could be the beginning of a shift in market sentiment back in favor of small caps relative to large caps.

It’s impossible to know if small caps will continue to outperform large caps as they have over the last month. They could just as easily continue to lag the large-cap market and still act as a drag on portfolio performance. But if they start to outperform, investors in small-cap ETFs will be rewarded. Using this week as an example, the S&P500 is only up 0.50% but the S&P Small Cap 600 is up 4%! That 4% gain in small caps is helping our portfolios look good right now, after holding them back for the last 18 months. We wouldn’t mind if that continues into 2020. 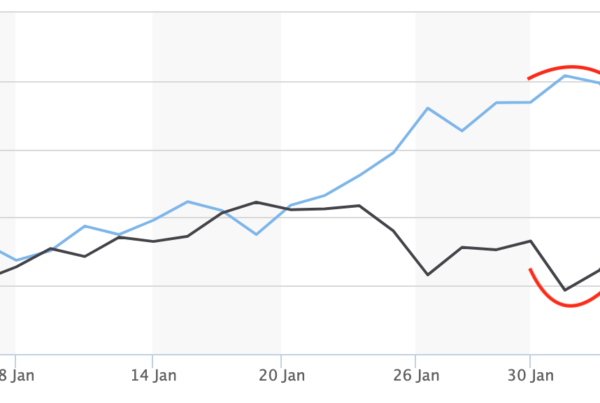