A Safe Bond ETF For Your Spare Cash

By Kevin Kleinman November 8, 2019 No Comments

One of the biggest reasons the average investor doesn’t perform as well as the broader market is because they live in fear of a market crash. More times than not, the crash they’re expecting never comes. So while they choose to keep their money in cash, thinking it’s a safe investment, they actually lose money by way of opportunity cost and inflation. In this article, we’ll introduce a safe bond ETF you should consider as an alternative to holding cash.

What’s the problem with cash?

The biggest problem with holding cash is the returns you miss out on by ignoring other investments. This is called opportunity cost, and it doesn’t just refer to holding cash, but any investment. For example, someone may be choosing between investing in two different stocks, but decide to only invest in one. If the stock that they didn’t invest in does better than the one they did invest in, that difference in performance is their opportunity cost.

Opportunity cost = foregone investment return – chosen investment return. Using our example, let’s assume you invested in Stock ABC and it posted a 10% return. Stock XYZ, which you didn’t invest in, rose by 14%. The result is an opportunity cost of 4%. This helps explain the problem with holding cash as an investment. In the current low interest-rate environment, cash likely posts a negative real rate of return. The S&P 500 is up 25% so far this year. So an investor who shunned the market in favor of holding cash has an opportunity cost of 25%!

But I Hate Risk

Perhaps you do not want to deal with the risks associated with the stock market. The first thing to realize is that there are still safe investments for cash that won’t have the same volatility as stocks. For instance, an aggregate bond index that was created in 1976 has been one of the best performing investments during broader market volatility. The largest yearly decline on record for this index is 2.90%: 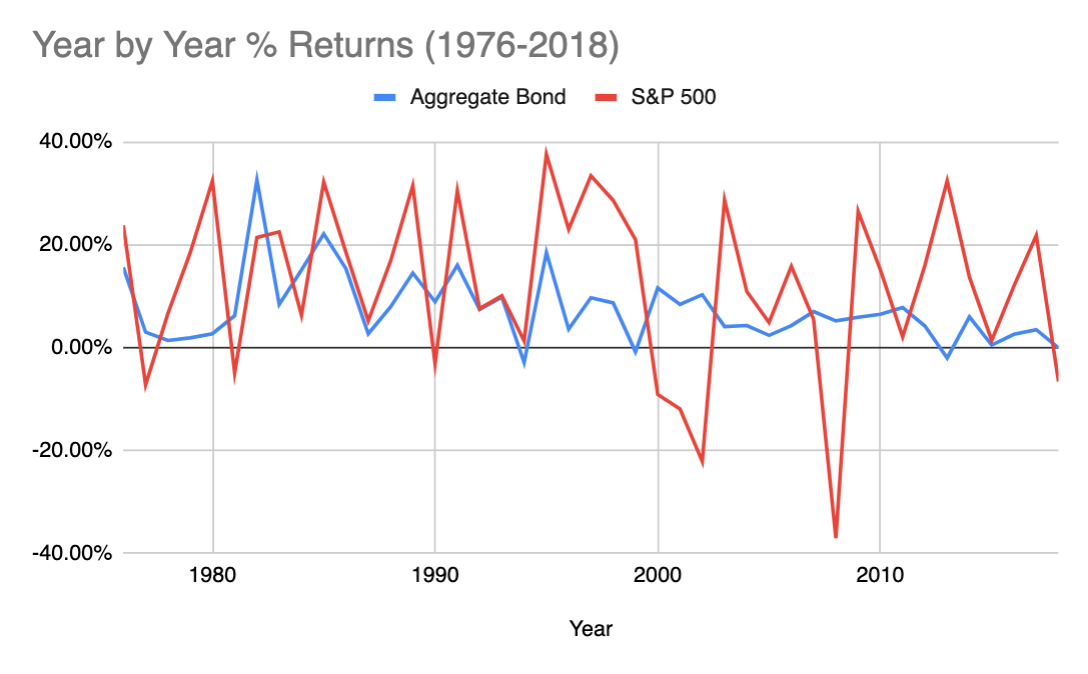 There is an efficient way to invest in this bond index via ETFs, such as AGG from iShares. AGG is a relatively safe bond ETF that has returned 8.29% year-to-date. So there has been an opportunity cost for investors in AGG relative to the S&P 500. But the 8.29% return is a far better return than sitting in cash would have generated. Furthermore, the index AGG tracks has a strong track record of posting positive returns:

Nothing Wrong With Conservative

There is nothing wrong with a conservative investment approach. But there is a key difference between conservative investing and ignoring investments. You’re not being conservative by sitting in cash, you’re being counterproductive. Due to inflation, and a low-interest-rate environment, it’s very likely that your cash is posting a negative return. Investing in a safe ETF like AGG is a much more efficient way to invest your cash.

You will experience much lower volatility than the broader stock market. This safe bond ETF will also make monthly interest payments. And, historically, AGG has benefitted from price appreciation as well. The index that AGG tracks posted a negative return just three times since 1976, with the largest drop being a small 2.90% decline in 1994. AGG is one of four bond ETFs we’d recommend that track the particular index referenced in this article. The other ones are BND, SCHZ, and SPAB.

Three tax tips for your portfolio

Where Will You Travel?