The Chinese stock market has been on a torrid rally over the last few weeks which is boosting Emerging Market ETFs, like VWO. Emerging Markets have been a drag on performance for diversified portfolios in the last few years as they have significantly underperformed the US indices. More recently, however, thanks in large part to a strong rally in Chinese stocks, Emerging Market ETFs are performing better. This performance is now acting as a tailwind for diversified portfolios that are still dealing with higher portfolio volatility, overall.

US has been the best game in town

The graph below shows the performance of the S&P500 (VOO) versus a Chinese stock market ETF (MCHI) and a broad-based Emerging Market ETF (VWO) from the last decade (2010-2019):

The S&P500 went up 250% during the last decade compared to less than 50% gains for MCHI and VWO. That type of performance gap was a huge drag on any portfolio that invested in Emerging Markets over US markets. We typically structure portfolios to have between a 3-10% equity allocation to Emerging Markets. Exact numbers vary by account depending on risk tolerance and other factors.

One might ask why would you invest in Emerging Markets at all if they’ve done so terribly over the last 10 years? Well, there’s a reason you’ve read the phrase, “past performance is no guarantee of future results.” It’s true. Just because the US market has been the best place to invest over the last decade doesn’t mean it will be from this point forward. And we’re starting to see signs of the US possibly losing its leadership status already.

China is helping close the gap

Over the last few months Emerging Markets have closed what had been a big performance gap with the S&P500 in 2020, thanks in large part to a rally in Chinese stocks. Here is the same graph from above adjusted to a year-to-date time frame:

The lower black line is VWO (broad Emerging Market ETF), the top black line is MCHI (Chinese stocks only ETF), and the blue line is VOO (S&P500 ETF). A few things stand out to us:

China is a very important market segment because it is typically the heaviest weighted geographical allocation in Emerging Market ETFs like VWO. The following table is a breakdown from Vanguard showing VWO’s geographic exposure:

Because the Chinese stock market has been doing so well since June 1st, and because China is by far the heaviest weighted country in VWO, VWO has been able to close its performance gap with VOO. VOO was performing 10% better than VWO year-to-date entering June. Today, that gap is just 1%. Without diving too deep, the reason VWO is still trailing VOO overall is twofold:

The correlation for global markets is higher today than ever before, but there remains performance variance. Said another way, US stocks and global stocks are expected to trend in the same direction over time, but just not exactly at the same speed. In the first graph we showed, you may have noticed that all of the listed markets moved in similar directions around the same time, but the US market went much higher, much faster. This is what generated the performance gap we observed in favor of US stocks versus Emerging Markets or Chinese markets: those markets rose less and at a slower pace.

Performance gaps are not uncommon. If we looked at the decade before last, 2000-2009, we also see a major performance gap. However, that time it was in favor of Emerging Markets. Take a look:

Both Emerging Markets (VEIEX) and US stocks (SPY) moved lower to start the decade before bottoming out in 2003. From there though, Emerging Markets were much stronger, rising more than 200% through 2007 compared to just a 20% return for US stocks. Beyond the reasons why this may have been the case is a simple fact that it was the case! Investors who think US stocks will never underperform their global counterparts again are being naive.

China moves to 2-year highs vs US stocks

We can compare two market segments against each other using a ratio chart. Then we can judge the trend of the ratio to determine which is performing better. For example, if price A is rising faster than price B is rising, the ratio chart will trend in favor of price A, even though both prices are rising. In that case, we would say price A is “stronger” than price B. Here is a ratio chart of MCHI vs VOO since 2012, which is when MCHI first started trading:

If you’re into theories, I would offer the following: Chinese stocks predictably weakened over fears of an all-out Trade War with the US. Once that didn’t materialize and a phase 1 trade deal reinstalled fractions of the status quo, they started rising. This was a classic case of the market assuming the worst and then repricing itself higher once those worst-case scenarios never materialized. Today, China’s totalitarian government gives them an advantage, if it’s okay to call it that, in dealing with the Coronavirus crisis.

So should I buy VWO or MCHI?

To recap, Chinese stocks have been rallying since June while the US market has been flat. This rally has boosted Emerging Market ETFs, which have large exposure to Chinese stocks. The question now is are you better off buying a China-only ETF like MCHI or ASHR, or a broad-based fund that has some exposure to China but to other Emerging Markets as well? We think there’s a place for both. Here’s an example of how we’ve been structuring allocations in some portfolios: 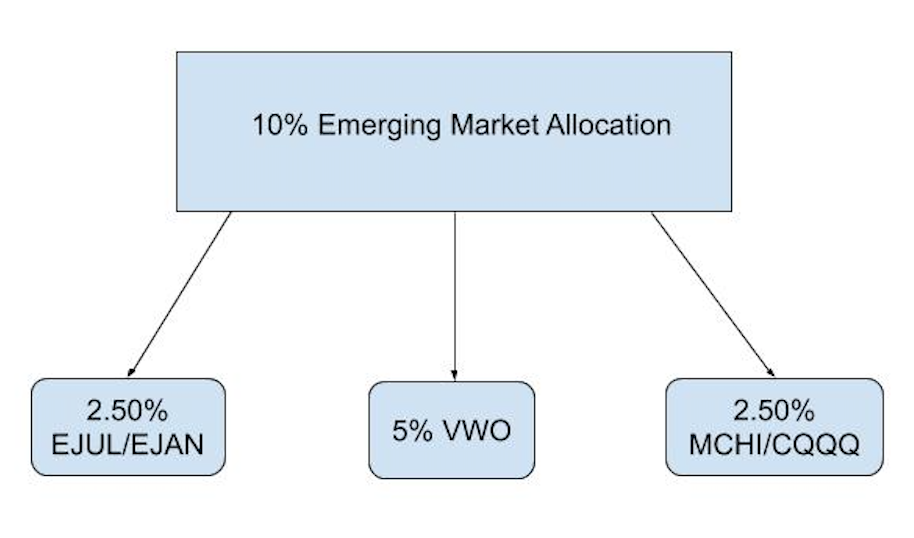 First, we take 10% of our total equity allocation (which may only be 70% of the total portfolio) and dedicate that to Emerging Markets. From there, we invest 5% in a broad-based Emerging Market ETF like VWO. And then we overweight China through additional investments in ETFs like MCHI or CQQQ. Lastly, we’re typically including a small allocation to a buffered Emerging Market ETF like EJUL or EJAN to help lower volatility within that portfolio segment. Please note that this is a simplified example of something that can end up being a bit more intricate.

There is a historical precedent for Emerging Market stocks to outperform US stocks. And while there’s no guarantee that that’s about to happen right now, there’s also no guarantee that it’s not. As believers in the benefits of global diversification anyway, we’re happy to see Emerging Markets performing better over the last two months. And given that much of that is a result of China’s market doing well, we’re exploring tactical ways to overweight China in some of our portfolios. If history teaches us anything, it’s to expect the next 10 years to look different than the last 10 years. And that could bode well for Emerging Markets and Chinese listed stocks. 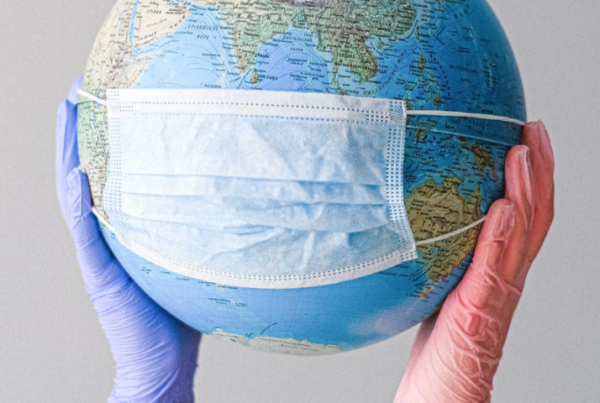 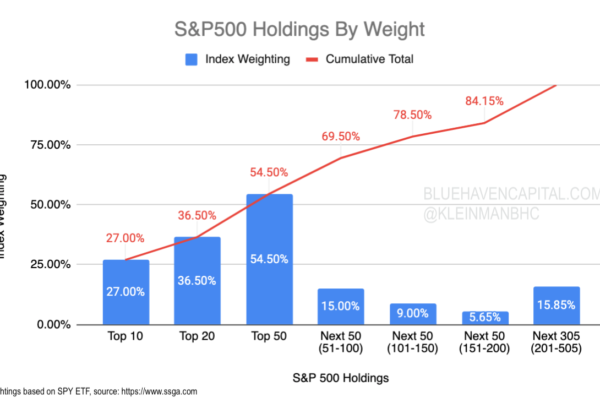